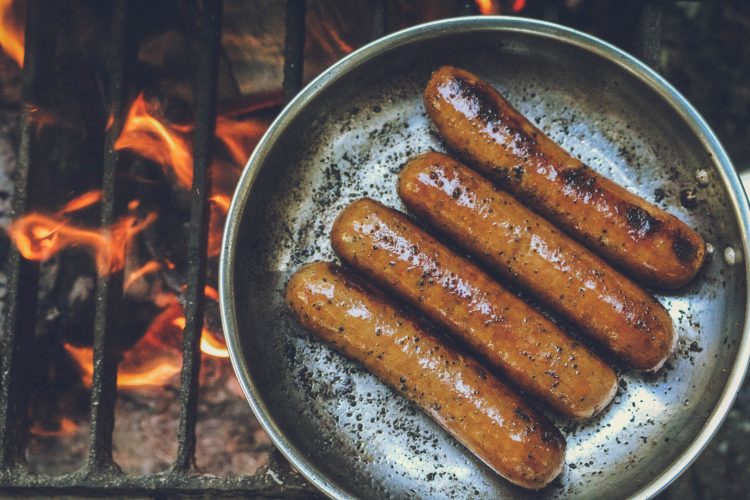 20 Meals you can make from Leftover Sausage

How often do you have one or two sausages leftover after dinner? Usually, they’ll get eaten cold the next day, but did you know you can make a variety of meals with 1 sausage?

For more ideas on leftovers, 100 frugal recipes and tips for every area of your budget, check out The Ulitmate Guide to Make and Save Money at Home.

Fried rice typically has rice, meat such as bacon/ham/chicken, egg, vegetables and soy sauce. Chop the sausage into small pieces and use instead of other meat.

We have a simple fried rice recipe here.

Typically, we either go vegetarian or use whatever meat we have, including at times one sausage diced. 2 Cups of cooked rice, 2 eggs scramble fried then some frozen or fresh veggies chopped smaller such as corn, carrot, broccoli, beans, capsicum etc. At times we’ve added chilli or other spices for a bit of a change.

Make a simple pizza base, spread on some sauce, sprinkle on the cheese then add your toppings such as pineapple, onion, capsicum, sliced sausage, then bake until golden brown.

This goes especially well for Italian or other flavoured sausages. Kids love making their own pizza’s and you can either buy a base or make one yourself. I have a recipe for pizza bases (and everything else from breakfast to desserts) in 26 Ingredients.

Or tortilla’s, toast, crumpets, English muffins, Turkish bread and similar can all be used as pizza bases too.

Risotto can be made with almost any combination of meat and vegetables. Select a recipe you like and swap out the meat for the sausage. The key is to use arborio rice and be patient while cooking it. Don’t add all the stock at once or you’ll get gluey risotto.

If you have leftover risotto, turn it into arancini balls the next night and serve with salad or vegetables. Arancini are basically risotto balls – roll risotto into a ball (press the ball around a cube of cheese if you like), roll the ball in some breadcrumbs and fry them. You can find a good recipe here.

Curried sausage recipes usually have 8 sausages for the recipes. Instead, if you have 2 sausages you can make up the difference with potato, pumpkin and carrot. It is less meat, still filling, though. This recipe is a good base you can modify.

A calzone is like a pizza folded in half. Mix up a pizza dough, spread sauce over the base, add your toppings to one-half then fold it over and press the edges together then bake until golden brown.

There’s a recipe for pizza dough and a variety of calzone suggestions in 26 Ingredients.

Make a short crust pastry and layer it with vegetables and thinly sliced sausage then cover in a white sauce or pasta sauce. Top with pastry or cheese and bake until cooked through.

Or fill it with a chunky tomato or gravy and vegetable based mix with the sausage. The filling is up to you!

You can find a recipe for shortcrust pastry and a selection of recipes for pies, fillings and more in 26 Ingredients.

Wrap the sausage up in pastry and cook as a sausage roll. It’s a meal for one. Alternatively, use some puff pastry and spread tomato sauce over a square or two.

Dice the sausage finely and sprinkle across the pastry, add some cheese and roll up then cut the roll thinly to create swirls. Bake in a moderate oven unti golden brown.

Try a savoury bread and butter style pudding instead of the usual sweeter dessert version. Use bread, butter, a runny white cheese sauce and thinly sliced sausage for something different. Serve with salad or vegetables.

Similar to breakfast muffins, make any savoury muffin and use diced sausages instead of ham or bacon. Muffins can be a mix of eggs whisked together, veggies such as capsicum, onion, grated zucchini then add the diced sausage and some cheese. Bake until cooked through.

Alternatively, use a flour based muffin recipe leaving out the sugar.

Cook pasta, stir through a jar of pasta bake sauce or mix up a cheese sauce. Roughly chop the cooked sausages and stir through. Cover with cheese and bake until golden brown. Find more pasta bake recipes and suggestions in 26 Ingredients.

Cook pasta, add the sausages (chopped up) and stir through any pasta sauce, a cheese sauce, or garlic and butter for a tasty pasta dish. Another option is to stir through a chunky dip like pesto. You can often get them reduced to clear which makes this a cheap and tasty meal.

It’s stating the obvious but eat it in a sandwich with sauce. Or if you are baking bread, dice it up and add it in a loaf or create a twist or plait.

To create a sausage twist, add the sausage to the dought then split the dough into 2 to 3 balls. Roll the dough into long sausages you can twist together or plait. Sprinkle with cheese then allow to rise and bake the same as regular bread.

You could rub each piece of dough with sauce before twisting or sprinkle cheese on the top, add herbs such as Italian herbs or anything you feel you’d like the flavour of.

Get a basic bread recipe in 26 Ingredients.

Toad in the hole is essentially a sausage pudding or mini muffins/rolls. You can put the sausages in dough and bake it then serve with vegetables. Make up some bread rolls or batter and slice up the sausages to make ‘toad in the hole’.

This is also a great way to use up vegetables. Chop the vegetables and sausages. Place them in a baking dish. Whisk together a few eggs and pour over the sausages and vegetables then bake until cooked through. We find roast vegetables such as pumpkin, potato, sweet potato and onion go well in a frittata.

Chop the sausages up, add onion, potato, carrot and other vegetables. Cover in a stock/gravy/sauce and French onion soup mix or whatever base you like for a casserole then cook slowly until the vegetables are cooked through and serve with bread.

This is not healthy by any stretch of the imagination, but if money is really tight, cook some 2-minute noodles with corn, peas or other frozen vegetables and add diced sausages.

Similar to risotto, paella is a rice-based dish which is simple but full of flavour. Use cooked sausages as the meat in any recipe you like for paella.

Thinly slice the sausages then layer lasagne sheets, sausages, vegetables such as zucchini, capsicum, carrot, pumpkin or whatever else you like. Cover with a pasta sauce, then lasagne sheets, white sauce, more sausages and vegetables, then pasta sauce etc. Keep going until you have used everything then bake until cooked through and golden brown.

Goulash is usually made with Kransky, potato and stock. Use sausages instead and add some more spices to boost the flavour. This is a dish my Austrian step mother used to make but she always used proper Kransky.

What do you do with leftover sausages?

Find more budget-friendly recipes and ideas to use up leftovers in 26 Ingredients.

Check out The Ultimate Guide to Make and Save Money at Home. In this guide, I cover everything from ideas to make money at home, how to set up a business for under $100, what you can claim on tax, my top frugal tips for every area of the budget, how to create a budget and stick to it, over 100 frugal recipes plus tips on balancing it all, finding the time and ways to entertain the kids.