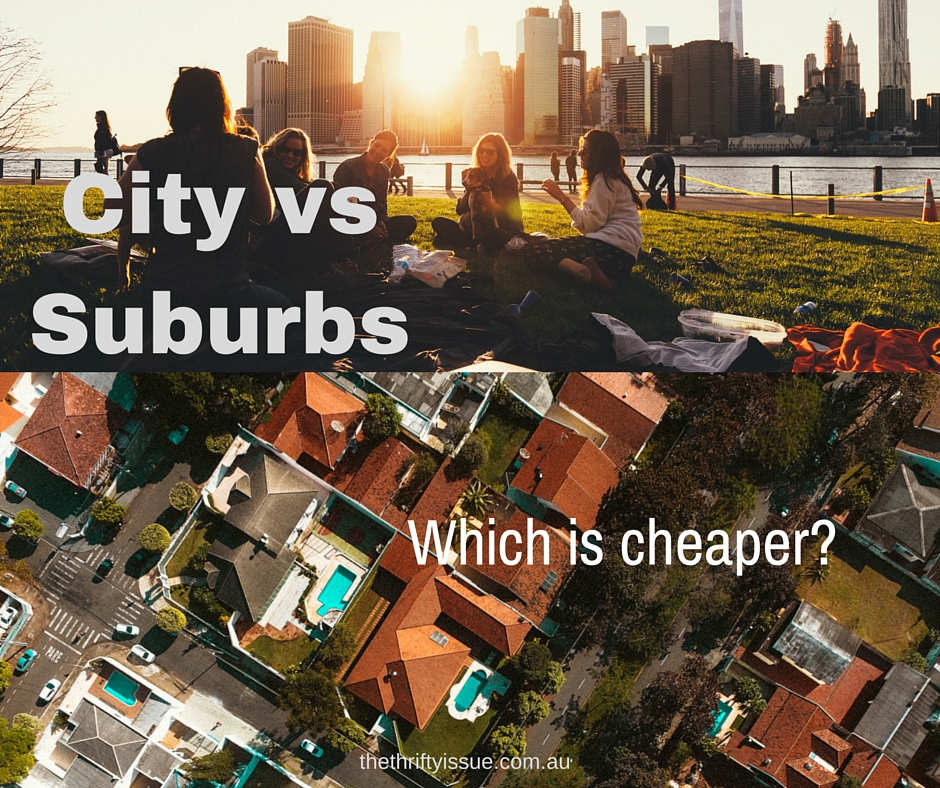 What saves more money living in a home in the suburbs or living in an inner city apartment?
Last year we moved from a large 4 bedroom home with a huge backyard, our own chickens, a swimming pool and lots of space in the suburbs to a tiny 2 bedroom unit right in the heart of a major city. It was a drastic lifestyle change resulting in not only a higher income but also lower living expenses.

It’s been 7 months since we moved to the city and last week went back to where we used to live. While we loved the slower pace and not having reception for a few days, it solidified to us we love our lifestyle. A few months into our move I did a comparison of our expenses and lifestyle city vs suburbs. I had been told how expensive the city is, why it is better for kids in the suburbs etc. I like both and can see the benefits for both. It is astronomically cheaper for us in the city and we prefer the lifestyle of inner city living. 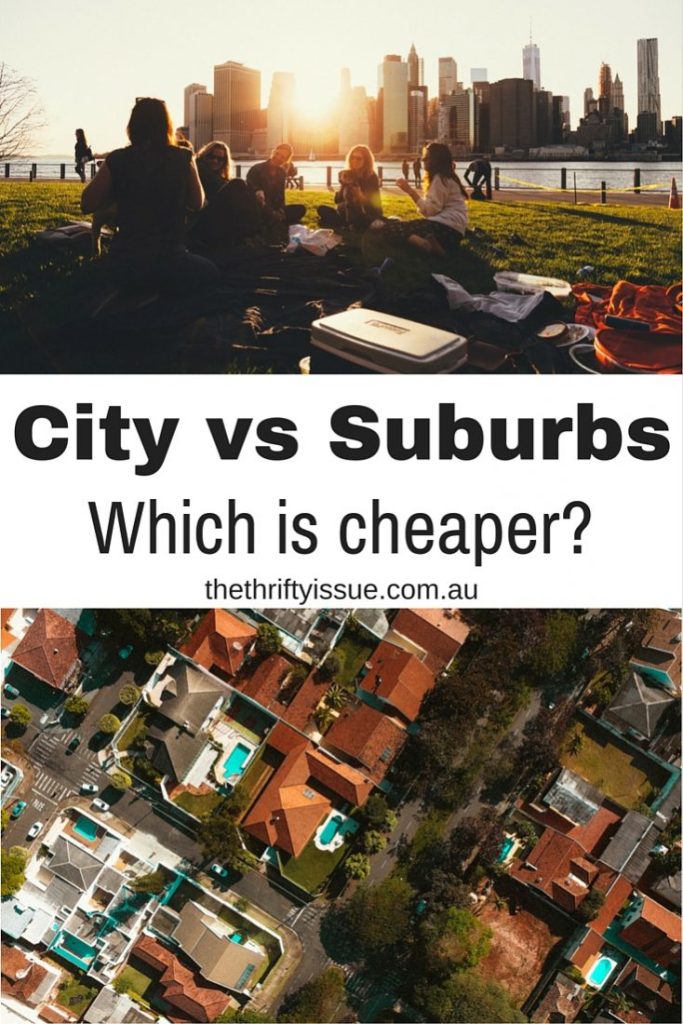 Here’s the breakdown comparison for different areas of our budget for a year.
Rent in the suburbs was $24,230 vs $29,400 in the city.
In the suburbs our house was 4 bedrooms, 2 bathrooms – one with a spa, 2 living areas, 2 dining areas, a double carport, swimming pool and backyard. It cost $540 a week, however sometimes one of the rooms was rented out for $200 a week, helping me save on rent. In total I made $3,850 on renting out a room at times in a 12 month period (I wrote about it more here and how to make your mortgage pay for itself).

In the city we live in a small 2 bedroom apartment for $600 per week. Only one bedroom has built in robes. It has a European laundry then a shower, toilet and vanity in the bathroom. The kitchen is a tiny half galley kitchen and the living area has enough room for a 2 seater futon, 4 seater dining table and work desk. We have rented it out on AirBnB a few times when we were away and made a total of $1,800 when we did.

In the city we sold our main car, immediately clearing the loan plus providing a savings buffer. The other car is stored at a friends house out of the city and has been used 4 times in the last 6 months. It costs $1,028 a year to register, $285 to insure, $200 for a service and for the first 6 months petrol has been under $500, assuming it continues as is the total for petrol is less than $1,000 for the year. That’s a total of $2,513.

In the city we walk everywhere, use free public transport and occasionally use Uber (if you choose to use Uber, use the code kyliet591ue to get a free ride). This year we have spent $200 in 6 months on public transport, the bulk of that was spent in the first three months of the year due to moving and sorting a few things out. If we continue this way, it is $400 a year, bringing our total for transport in the city up to $2,913.

Groceries in the suburbs $15,600 vs $7,800 in the city
In the suburbs we didn’t have access to the markets we do here and prices were more expensive for many of the items we buy. We had chickens yet it didn’t make much of a difference once you took into account their food and straw etc. Overall we spent around $300 per week on food there compared to $150 per week here.

However, it is very easy to slip into a takeaway lifestyle in the city and overspend massively. Currently we are averaging $150 a week on groceries. We could easily spend $600+ if we ate out as often as we felt like it because everything is so close and easy to get eat at.

Health in the suburbs was $1,496 vs $0 in the city
We paid for one gym membership when living in the suburbs plus had the upkeep of the swimming pool (chemicals, salt etc cost around $300 for the year we were there). Now we have two gyms in our complex, along with a pool, spa and saunas and other amenities all included in the rent.

Our daughters participate in rock climbing and the price was the same in the suburbs as it is here in the city.

Bills in the suburbs were $7,045 vs $1,440 in the city
Gas, electricity, water, phone, internet and other bills are slightly different here compared to the suburbs.

The last two quarters of last year there was an issue with the gas heater resulting in a $3,400 gas bill for 6 months. Prior to that it was around $400 a quarter. Electricity was high at $600 a quarter there even though the heating and hot water were gas and the pool was solar powered. Water was $445 for the year. With internet, where we were we had to pay for a phone line as well. Here in the city we don’t, we upgraded to an unlimited plan though so the cost is equal.

In the city our bills are averaging $1,440 total for the year. We get billed monthly and even when using the heater or air conditioner it has remained around $120 a month.

Living in the suburbs my house was huge and I had to clean it all. We hoarded so much more stuff because there was too much space to store it in. The upkeep of the gardens and house in general was too much for me. The house was old and even if you did a deep clean, it still felt dirty. Paying a cleaner was huge. When I got sick my sister helped clean which was a relief and greatly appreciated.

I spent hours every week cleaning and maintaining the house and car along with travelling in the car.

In the city I have more time, I spend less time cleaning and it is easier to clean our small space. We sold off virtually everything we owned and our unit came fully furnished. We don’t buy much because we don’t have the space for it.

Medical
In the suburbs my doctor cost more than my current doctor. The waitlist for treatments I need in the suburbs was extensive so we went private, costing thousands. I found out here the public list is only a few weeks here and because of pre-existing conditions I am top of the list immediately.

All the medical care I need is located in one building except for hospital care which is a 10 minute walk away. This alone has been huge for us. I am yet to go through the treatment I need this year as it is due in August, so will add the comparison for it then.

Total costs
Overall the expenses above cost us $74,279 to live in the suburbs, not including the insurance which was the same for each location. We could have reduced this by renting somewhere smaller and cheaper, downsizing the cars, choosing not to do movies and restaurants etc.

In the city it costs us $42,713 to live, which could also be reduced by renting a cheaper apartment, getting rid of the car we barely use and choosing to do no entertainment. That said, moving costs so take that into account when doing your own comparisons. For example, sometimes I moved myself, other times I used removalists. It was by far easier to use a removalist such as Sydney removals and not that much more than doing it myself.

I save hours every week by having a smaller place.
We also save on business expenses as our complex includes meeting rooms we can book and use as needed, plus a huge dining room with commercial kitchen for parties and a private lounge area.

Previously we paid $200 to $2,000 to book similar when living in the suburbs. This is a business expense though so I didn’t include it in our comparison above. It’s another $7,400 saved this year already and one of the reasons we opted to live where we do for a slightly higher rent compared to one of the cheaper 2 bedroom apartments available.

Summary
This isn’t a totally fair comparison as we have gone from a large home to a small one. We are saving over $30,000 a year by living where we do now and have a higher quality of life with more time as a family, more fun and a healthier lifestyle. Plus, our incomes are double here what we had in the suburbs.

I can’t picture ever living in the suburbs again.

Take the time to truly evaluate how you live, how much each aspect of your life costs and how making some changes, moving house, downsizing or moving to a different area would impact on your life.

What are your thoughts? Do you live in the suburbs or city? Have you done a tree change?

Get Exclusive Freebies, Discounts, Bonuses and Tips to Make and Save Money Every Week!