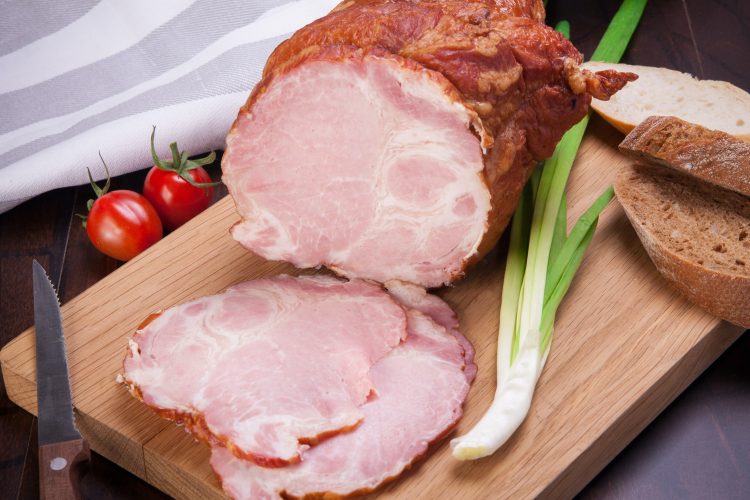 What can you do With Leftover Ham?

How often do we get a huge ham for Christmas day then end up with leftovers but we don’t want ham sandwiches for the next month? The good news is you don’t have to! Here are a variety of ways to use it from breakfasts to main meals.

Slice or dice the ham and freeze it in portions. One cup of diced hame is great for recipes such as quiche, fried rice or pizza. Freeze slices of ham in portions large enough for a sandwich or two then defrost as needed.

A favourite in my house, fried rice is easy to make and can be made gluten free, low carb or in all sorts of variations. We have a basic fried rice recipe here plus for low carb use grated cauliflower instead of rice. You don’t have to follow a recipe exactly. Get a cup or two of leftover rice (depending on how many you are feeding). Fry onions and ham, scramble some eggs, add that with the rice and some vegetables together and fry. Do it with whatever you have on hand.

3.) Use Ham Instead of Bacon

Ok, I know it is not the same as bacon but it can often be used the same. Fry ham with eggs for breakfast or use it in any other recipe requiring bacon.

Toasted cheese sandwiches are usually popular. Mix it up with any combination of ham, cheese, pineapple, tomato or anything else you like. You can either fry them in a pan, use a toasting machine or grill them.

Make your own pizza or buy a cheap frozen one and improve on the toppings with ham and anything else you want. Making your own pizza dough is easy. Alternatively, use leftover bread to make toast pizzas, use tortilla’s, pita bread or anything similar for your pizza base. 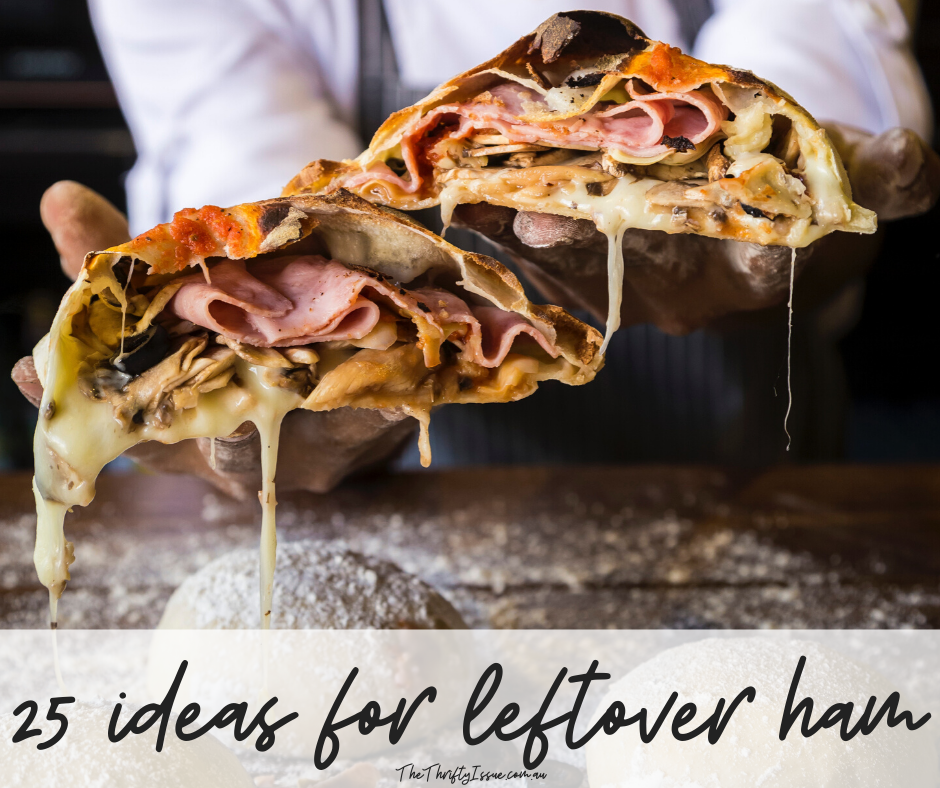 Using pastry, ham, eggs and some onion or anything else you like you can whip up a delicious pie. Check out a recipe here.

Quiche can be made either crustless or with a base using pastry, rice or bread. Whisk eggs, diced ham and vegetables together such as onion, capsicum, asparagus or anything you like, add some cheese and bake. It’s an easy dish that can be eaten hot or cold, frozen for later or is great for lunches. You can also make mini quiches in muffin trays.

My grandmothers’ favourite recipe was pea and ham soup. This recipe uses frozen peas, which most people tend to have on hand. Traditional pea and ham soup uses split peas such as this recipe.

Slice ham, add olives, cheese, sundried tomatoes, nuts, crackers, dip and anything else you have on had to create an antipasto platter. 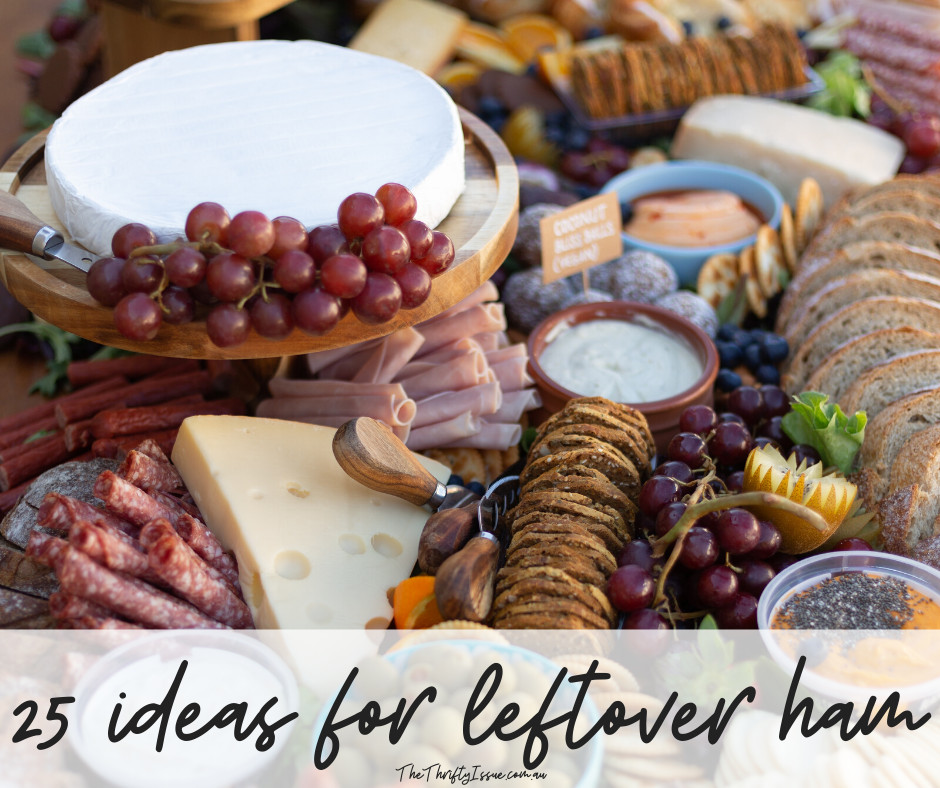 An easy way to use up veggies or other leftovers is to make fritters. You can use cooked vegetables chopped finely or grate vegetables such as broccoli, cauliflower, carrot, potato or similar, mix with an egg and breadcrumbs or cheese then fry like hamburger patties.

Get a head start on back to school or fill hungry tummies through the school holidays with ham and cheese scrolls or bread rolls. They are easy to make, can freeze for a month or so and are popular with everyone.

Get a few thicker slices of ham and grilled them then slice them smaller. Make a salad with any greens, grated carrot, cucumber, add some grilled ham and grilled pineapple or mango if you like.

Arborio rice is needed for risotto and leftovers can be made into arancini balls or croquettes for another meal. A versatile dish you can use ham, corn, mushrooms, zucchini and chicken stock for a delicious risotto.

With the risotto leftovers, you can either wrap it around a stick and dip it in breadcrumbs to fry for a croquette or cut cheese into cubes, wrap risotto around the cheese to form a ball, roll it in breadcrumbs and fry for arancini balls. Serve either of them with salad.

This is like a pizza folded in half and pressed together to make a flat pie. Make it similar to a pizza with toppings or filling on one half. Fold the other half over the top and press the edges together to seal it. Cut a couple of air holes in the top with a knife then cook until golden. 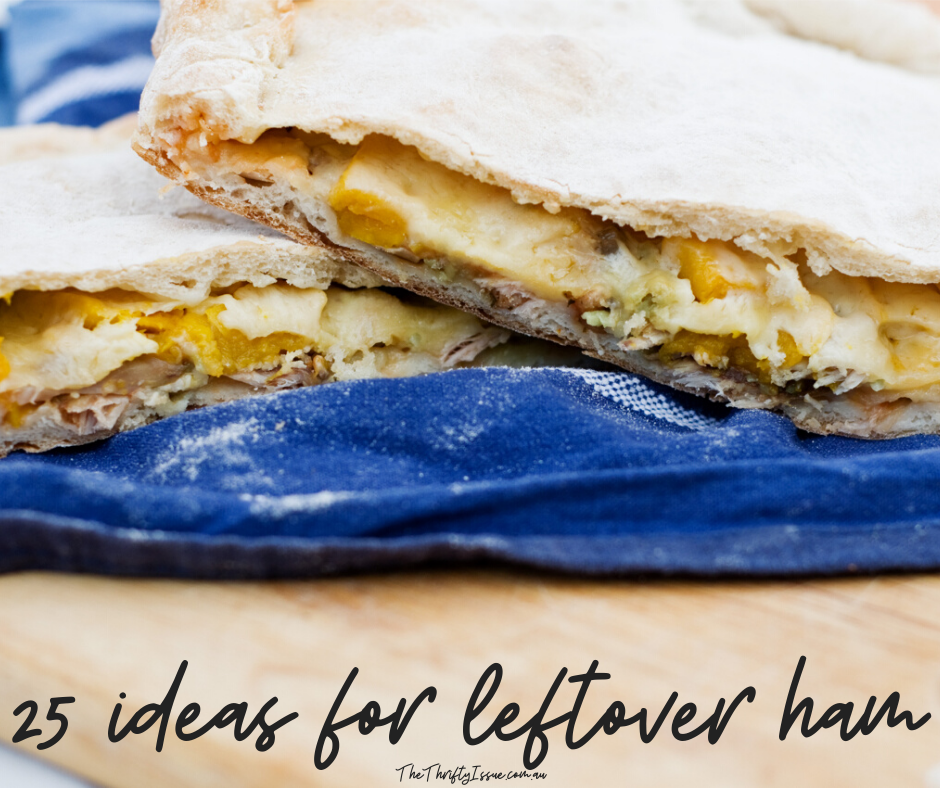 When we think of crepes or pancakes, we often think of ice-cream, maple syrup, lemon and sugar or cream and berries. Sweet dishes for dessert of having them for breakfast. Savoury pancakes are just as delicious. Make the batter without the sugar, cook them in the same manner but use savoury fillings such as ham, cheese and pineapple or ham, cheese and mushrooms.

Similar to pancakes, waffles can be savoury. Add finely diced ham, corn and cheese to waffle batter for a tasty treat.

If you had this on Christmas day you might not want to have it again. Peel and cube some potatoes. Boil them until soft and drain them. At the same time, fry an onion and diced ham while you boil a few eggs. Chop the eggs and add all the ingredients together in a bowl with mayonnaise. Add salt and pepper or other spices to taste. This is a very basic potato salad but has always been a hit.

Boil a packet of pasta, drain it and place in a boil. Add some diced ham, dice an onion and capsicum, add a tin of corn and salad dressing to taste for an easy summer pasta salad. 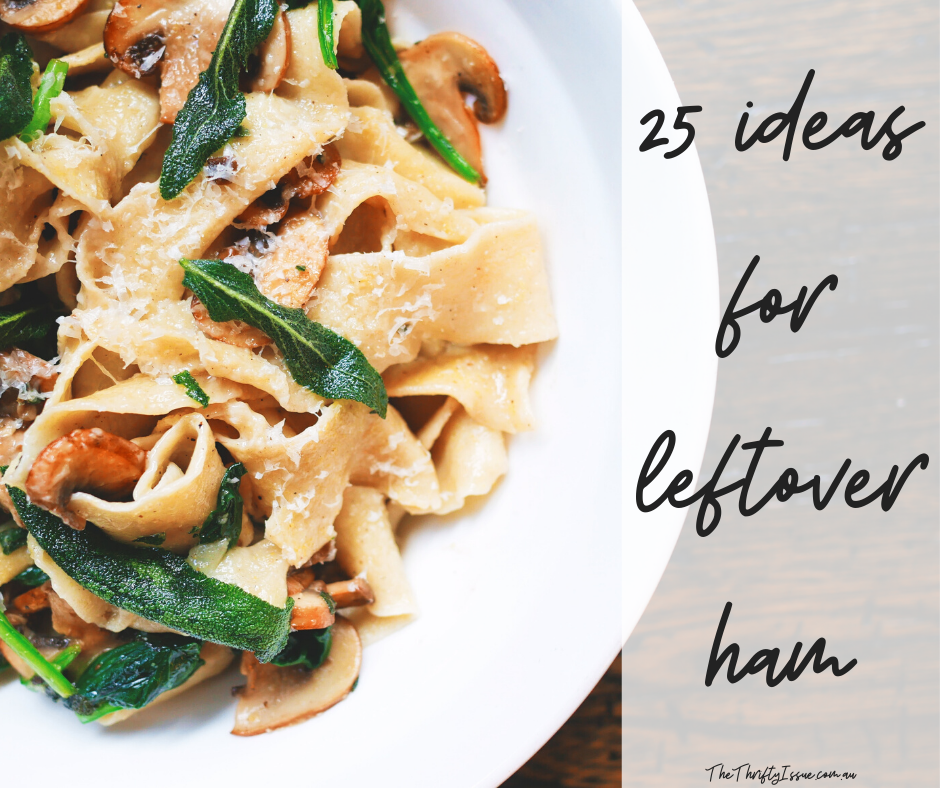 A tasty twist on a classic dish is adding ham to your macaroni and cheese. My kids love this, it’s easy to make and you can add other vegetables to make the meal go further if you want as well.

Creamy pasta, ham, onion and a sprinkle of cheese make for a delicious dish. Alfredo or carbonara are two popular options.

Shortcrust pastry for the base, a creamy sauce, ham and vegetables then topped with mashed potato and cheese can make for a great pie using a variety of leftovers.

Savoury muffins are great for breakfast or lunch boxes. You can add any combination of vegetables as well such as grated carrot or zucchini, corn kernels and even top it with a slice of tomato for something different.

A great breakfast option or snack, omelettes can be made with ham and various other fillings such as mushrooms, tomato, cheese and herbs.

What do you do with leftover ham?